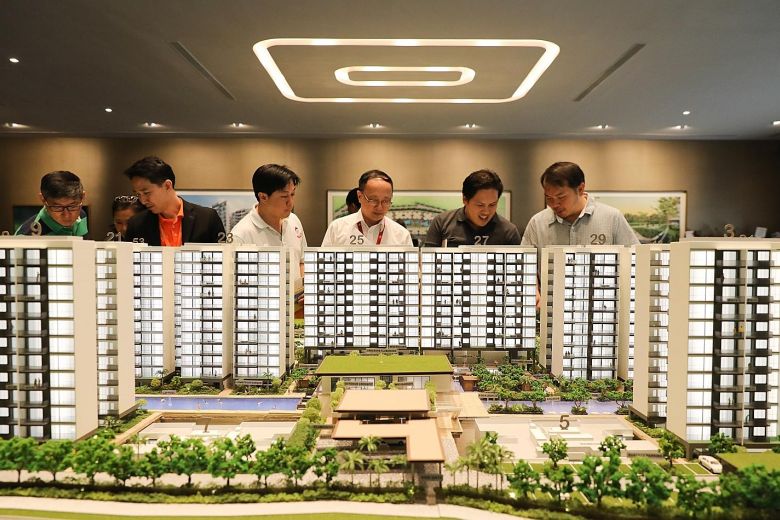 Private home sales are on the rebound after the festive lull, as developers in Singapore sold 1,054 units last month, up from the 455 units they moved in February.

The latest number is also 47 per cent higher than the 716 units sold in March last year.

The figures – which exclude executive condominium (EC) units – were released by the Urban Redevelopment Authority yesterday based on its survey of licensed housing developers.

Market observers point to a supply-led increase, noting the slew of recent launches.

Most believe that demand will remain healthy in the coming months as more projects are rolled out, giving buyers more options.

Ten developments were launched last month, including two mega projects, Treasure at Tampines and The Florence Residences, which accounted for more than a third of the total new private home sales last month.

Huttons Asia head of research Lee Sze Teck noted that total sales for the first quarter of this year are better than for the same period last year despite the cooling measures introduced in July last year.

“This shows the resilience of the market, which could have found its footing,” he said.

Cushman & Wakefield senior director and head of research Christine Li found the overall pace of sales encouraging, and noted it was well-spread across different projects.

She added that buyers “remain price sensitive and are spoilt for choice”.

“Given the plethora of upcoming launches, developers are expected to price their launches reasonably or experiment with unique concepts,” she said.

However, Mr Ong Teck Hui, JLL senior director of research and consultancy, said the surge in launches was “very much more than what the market can absorb”.

He said: “While it resulted in 1,054 units sold, the overall take-up rate of 58.2 per cent reflects the mismatch between supply and demand.

“While there is underlying demand, the magnitude has been affected by last July’s cooling measures as well as cautious market sentiments.”

Mr Desmond Sim, CBRE’s head of research for South-east Asia, said developers may slow down future launches “to give the market a breather” and allow existing inventory to clear.

He added: “On the demand side, buyers may adopt a wait-and-see stance, in anticipation of prices declining in the coming quarters.”

However, Cushman & Wakefield’s Ms Li believes prices are likely to remain sticky due to most developers having healthy balance sheets and time to sell units before the five-year Additional Buyer’s Stamp Duty deadline hits.

Including ECs, which are a public-private housing hybrid, developers found buyers for 1,062 units last month, higher than the 457 units they moved in February and the 788 units they sold in March a year ago.